This week’s recipe is the perfect dessert for an impromptu Olympic party. It’s been on our specials menu this last week, and always gets a lot of love. An irresistible mixture of pieces of meringue, whipped cream and strawberries, this dessert bursts with the flavors of British summer.

Rumor has it the name came about after a pavlova was dropped at the famous boarding school. In true British style, it was scooped up and served – along with the new name! 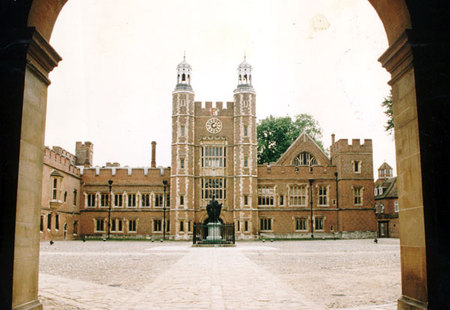 A word of warning: do not mix this dish in advance. You can prepare the separate components, but fold together at the last moment to prevent the meringue melting into the cream. 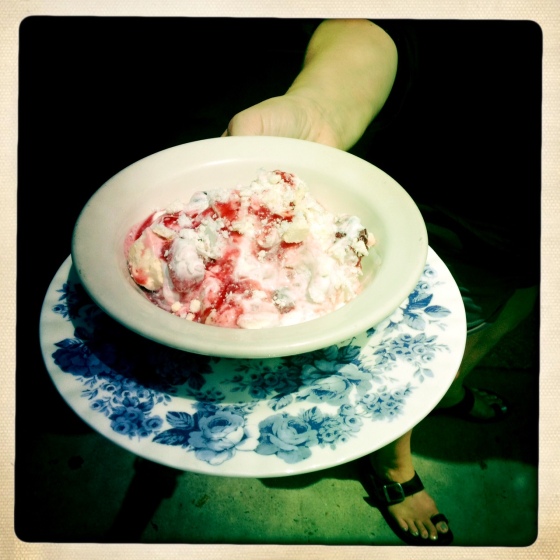 For your perusal, the very kind words of UK newspaper The Telegraph on our Royal Wedding celebrations:

Do New Yorkers care about the Royal Wedding? You bet. Nicky Perry of Tea and Sympathy leads the charge
By Melissa Whitworth | April 20th, 2011 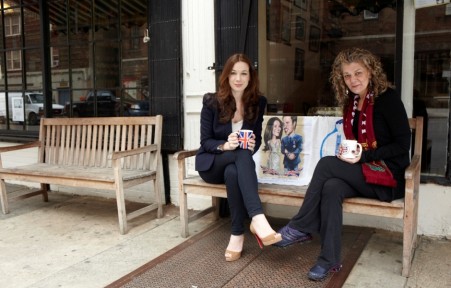 Having a cuppa with Nicky Perry, owner of Tea and Sympathy (Circe Hamilton)

Nicky Perry has been serving Sunday roasts and cream teas to homesick Brits in NYC for the last 20 years. Her restaurant, Tea & Sympathy, is a beloved expat institution, here in Greenwich Village. In fact, it’s the only place in the city where you can get a decent cuppa.

“I’ve done more for British food in America than Jamie Oliver – where’s my MBE?” she asks. Local rumour has it that when the British Consulate here gets a call they can’t deal with, they redirect it to Perry.

My friend, Circe Hamilton, a British photographer who has been living in NYC for 19 years says, “Perry is the local mayor, her reputation precedes her and she’s a force to be reckoned with. She’s never afraid to shout at her punters and get them all in line. I love a woman where you know what she thinks immediately. It’s very comforting knowing there’s a little bit of England around the corner.”

On the 29th April, Perry and her friend, fellow-Brit Penny Bradley, will be hosting the street party to end all parties in celebration of the royal wedding of Prince William and Kate Middleton.  They plan to close down part of Greenwich Avenue outside their restaurants, and have the celebrations spill out onto the streets.

Bradley is the co-owner of Lyon, the French restaurant next-door to Tea & Sympathy. Her business partner, François Latapie, has agreed to be British for the weekend (as long as Penny helps him celebrate Bastille Day later in the year with a few games of Pétanque).

The restaurants will be serving full English breakfast, kedgeree, Spotted Dick, Eton Mess, Brown Windsor soup and Pimm’s. Perry has been trying to hunt down the menu they’ll be serving at Buckingham Palace on the day, so she can recreate it for her New York customers. In the meantime, she has her chef baking Prince William’s favourite pudding, a kind of  chocolate biscuit cake with raisins.

Nearby shopkeepers will be decorating their stores with Union Jacks and bunting. In fact, at the moment there is a huge Andy Warhol-style painting of the Queen in the window of the local chemist. A charity raffle will include a return trip to London courtesy of Virgin Atlantic, and clothing donated by Elizabeth Hurley. A Pearly King and Queen will perform songs in the evening; there will be Morris dancers. Perry has spent $1800 on bunting.

At Lyon there will be two large screens where live coverage of the Royal wedding will commence at 6am (because of the five-hour time difference).

“It’s going to be a right Royal knees-up,” says Perry.